Just in: 7 trades lost there lives in car accident 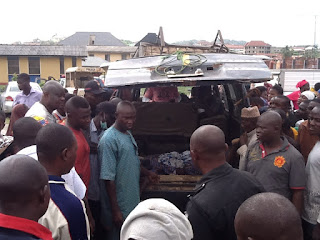 No fewer than seven traders, including a teenager on Tuesday morning, lost their lives in ghastly auto crash around Oko, a border town between Osun and Oyo state.


The mangled corpses of the victims were taken to a Catholic Hospital located at Jaleyemi area, Osogbo, Osun State, as relations and others traders, who were travelling along with them besieged the medical facility, wailing over the sad development.

Though, details of the incident were still sketchy as of the time of filing this report, Tribune Online reliably gathered that the driver of the vehicle in which they were travelling lost control before the accident.
Posted by Cheta Igbokwe
Labels: Breaking news, death