Menu
Home » Politics » "I Did Not Slap Any Lawmaker" - Senator Ali

"I Did Not Slap Any Lawmaker" - Senator Ali 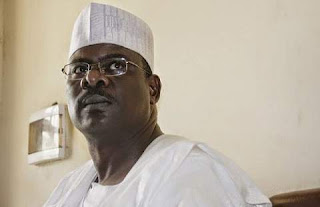 Borno Senator, Ali Ndume has denied reports that he slapped a state lawmaker from Damboa prompting the suspension of activities in the Borno state house of assembly.

Sen. Ali Ndume (Borno South) on Friday denied alleged assault on a member of Borno State House of Assembly, Bukar Daja-Ali.
The House on Thursday alleged that Ndume slapped Bukar Daja-Ali, a member representing Damboa Constituency, at a political meeting in Maiduguri. A statement signed by the Speaker, Abdulkareem Lawal, issued in Maiduguri, petitioned the Inspector-General of Police to investigate the matter.

Lawal said that the House had adopted a resolution calling on the police to investigate attack on another legislator, Muhammad Saleh-Banga, by hoodlums at Kwayar Kusar Local Government area.
He said that the resolution directed the State Government to relieve the appointment of Secretary of Kwayar Kusar Local Government Council. Lawal said that House also resolved to embark on suspension of legislative businesses until their demands were met. In a swift reaction, Ndume dismissed the claim as “falsehood”, aimed at tarnishing his image.

“For the avoidance of doubt, I cannot remember meeting any member named Habu Dala-Ali as erroneously circulated. “Honestly, the member is not telling the truth; there is nothing like that. I never slapped anybody.
“What transpired was that the member came to my house for a meeting along with some hoodlums who began raining all sorts of insult on me in front of everybody.

“I was going to meet the hoodlums to demand why they came to my house to insult me when the said member tried to stop me. The only thing I did was to tell him not to touch me. “ I angrily asked him why he came with people into my house to insult me and went inside and left him. “This happened in front of everybody and people who were there saw what happened.
“The hoodlums later came back when they realised they made mistake and apologised, which I have forgiven them. “So, I don’t know how the issue of slapping a member of a Borno State House of Assembly came from. “I challenge him or any other person coming up with such claim to present any evidence that I slapped him,” Ndume said.
Posted by Unknown
Labels: Politics