How Can You Sleep While Owing Workers? Buhari Blasts Governors 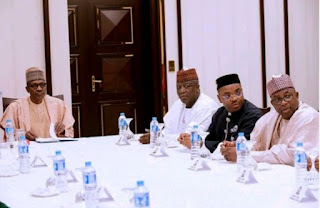 President Muhammadu Buhari has chided State governors who are still owing workers, despite his administration’s intervention.

Buhari spoke at the Aso Rock Presidential Villa in Abuja on Tuesday while receiving a representation of governors led by the chairman of the Nigerian Governors’ Forum, Abdul’Aziz Abubakar Yari of Zamfara State.

Those who visited:
On the delegation included the governors of Ondo, Kebbi Bauchi, Jigawa, Kwara and Akwa Ibom as well as the deputy governor of Ebonyi State.

What he said:
According to a statement by his spokesman Mr Femi Adesina, Buhari wondered how the governors sleep while owing salaries.
He told the governors that two out of the three-pronged focus of the ruling All Progressives Congress (APC) to secure the country and fight corruption had received some commendable reviews by the people.

The president said: “How can anyone go to bed and sleep soundly when workers have not been paid their salaries for months.
“I actually wonder how the workers feed their families, pay their rents and even pay school fees for their children.”

“God has been merciful in hearing the prayers of his servants so the rainy season has been good, you can ask the Kebbi State governor on this, and our enormous food importation bill has gone down,’’ Buhari stated.

Yari was quoted as saying that the various interventions by the Federal Government, include the bailouts, were judiciously utilized by the states.

He told Buhari that the governors inherited backlog of unpaid salaries and huge debts portfolios on assumption of office.

“We are concerned with the situation in our states, and we are trying our best to manage the resources,’’ the governor said.
Posted by Unknown
Labels: News, Politics