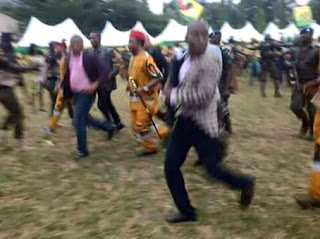 According to reports coming to our news desk have it that Governor Willie Obiano and His team were chased away from Campaign ground in Orumba this afternoon.
9News Nigeria learnt that this is coming after the traditional rulers in the local government jointly called for the boycott of Gov Obiano’s campaign in the area base on the fact that his government neglected the people of Orumba.

This is second in a series now. The first one at Onitsha South Local Govt where the Chairman of the council, Emeka Asoanya and Secretary of the Party, Noel Udeoji were robbed of cash and valuables.
Ndi Anambra are getting set for the real game.
Details later.
Posted by Unknown
Labels: Politics