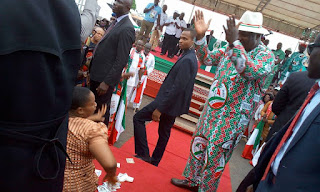 Enugu State Governor,  Ifeanyi Ugwuanyi of Enugu State today, overwhelmed audience at the flag off of the Local Government Election campaign of the Peoples Democratic Party (PDP) in Enugu North L.G.A with tears of joy, when he spotted from the podium, a physically challenged woman who was struggling to have a glimpse of him and invited her to the stage. 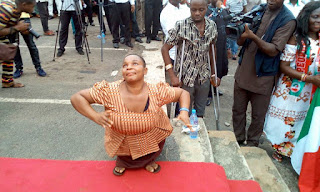 The governor asked the mother of one, Grace Okoye, from Abia State resident in Enugu, what she wanted him to do for her.
Responding, she first appreciated Gov. Ugwuanyi for taking notice of her presence in the midst of the mammoth crowd at the event, narrating with emotions how she has been struggling to survive and take care of her baby girl through the sale of sachet water, and pleaded with him to assist her start a new life. 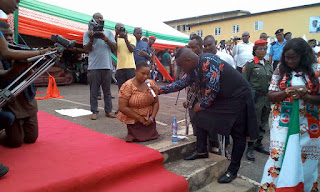 At the peak of her narration, tears, uncontrollable tears, started pouring out from the eyes of many, as Gov. Ugwuanyi announced a personal donation of N1million and also promised to open a business for her, saying: "This is not politics. If you are educated we will give you employment but if you are not, an appropriate business will be opened for you". 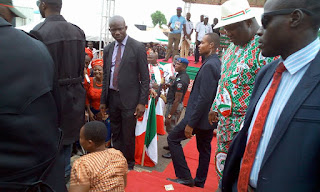