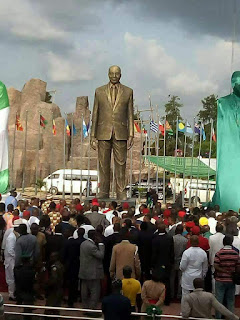 Rochas Okorocha, Executive Governor Of Imo State unveiled a giant statue of South Africa president Jacob Zuma in Owerri Imo state.
President Zuma who is on a two day visit to Owerri, Imo State, South East Nigeria. He was confered a traditional chieftaincy title by the state governor, a road was named after him and then, a statue of him unveiled in Owerri city.

Giant statue of The South African Jacob Zuma unveiled by Rochas Okorocha in Owerri sparks outrage
Governor Okorocha also conferred on President Zuma, the Imo Merit Award, the highest award in the State conferred on distinguished personalities who have made a difference in the development of their communities and to humanity.

This has triggered fierce reactions from Imo state indigenes, Nigerians who took to social media to vent their disappointment and anger.
The visit of President Zuma, according to Imo State government, is for the signing of an MoU between Rochas Foundation with the Zuma Foundation. 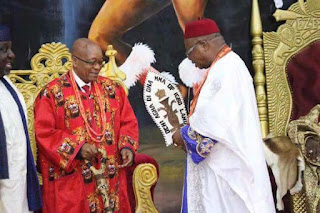 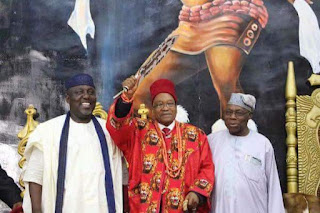