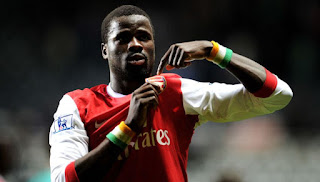 Emmanuel Eboue who happened to be former Arsenal and Galatasary player has been diagnosed with HIV.
The player’s agent, Tekin Birinci, posted an update on Facebook: “Unfortunately is true that we are facing some medical problems about Eboue. He will go to England… so we will know how serious it is”.

Emmanuel Eboue will fly to England to have further tests after it was discovered the 34-year-old had contracted HIV, according to Goal Turkey.
Report claimed the virus was discovered as the former Galatasaray and Arsenal star was having a medical for Cypriot side Limassol.

The HIV virus was detected in Ebuoe’s blood.
The Ivorian made 215 appearances for Arsenal during his six-year spell in north London. Scoring 10 goals and assisting a further 20.
In 2001 the right-back moved to Turkish giants Galatasaray, winning two Super Lig titles as well as a Turkish league cup in his four years at the club.
Posted by Unknown
Labels: Sports