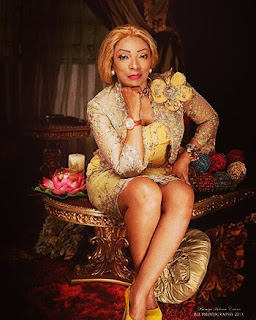 Former First Lady of Akwa Ibom State, Uduak Abasi Umondak, is bereaved.
Her grief is occasioned by the death of her only child, Victoria Nkanga Herman.
It was learnt that Victoria suffered a cardiac arrest in the United States. The 40-year-old lady never recovered from it, as she died On October 2, 2017.

Victoria was Uduak’s only child from her marriage to Nsikak Nkanga, the former Military governor of Akwa Ibom state.
She was was buried in the USA, where she had lived almost all her life. The funeral service took place on Monday, 9 October, 2017, at Capital Christian Fellowship. 10411 Greenbelt, Lanham, Maryland, USA. The interment took place at National Harmony Memorial Park, 7101 Sheriff Road, Landover.
Posted by Unknown
Labels: Politics