FG vs Kanu: Abaribe Asked Court to Discharge him from Kanu’s Bail over Army Raid 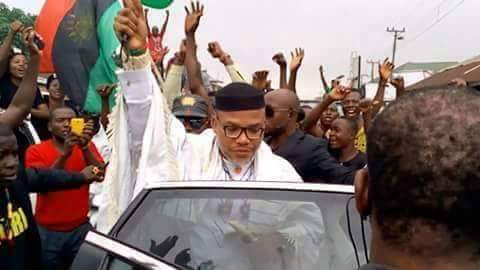 The Senator representing Abia South Senatorial District, Enyinnaya Abaribe, has applied to the Federal High Court Abuja, to be discharged from suretyship, bond and recognizance of the bail of the leader of the Indigenous People of Biafra,(IPOB), Mazi Nnamdi Kanu. In an application filed against the Federal government, Nnamdi Kanu and his his Co-defendants, Senator Abaribe is asking the court to make an order discharging him as surety for Nnamdi Kanu, praying the court to discharge him entirely from the incidence of bail of Kanu. He is also asking for a discharge of bond used for Kanu’s bail and a refund of N100m used for Kanu’s bail and other matters associating him to the bail due to Federal government raid on IPOB Nnamdi Kanu’s home through the Nigeria Military.