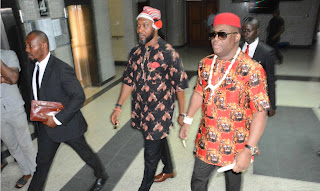 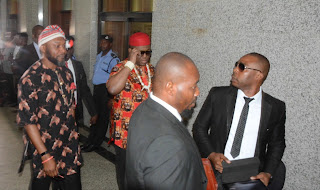 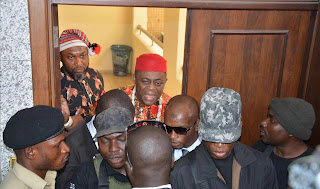 The former minister of aviation, Femi Fani-Kayode, was at the Federal High Court in Abuja on Tuesday, October 17, alongside Osita Chidoka, another former minister and flag bearer of the United Progressive Party (UPP) in the forthcoming Anambra state governorship election.

Both gentle men were dressed in ishi Agu (a popular traditional Igbo attire ), and adorned there dressing with a red cap and other accessories - usually made from elephant's ivory tusk.
And from IPOB memebers it was gathered that Fani-Kayode's attire, including the accessories were a gift from the leader of the IPOB.
Posted by Cheta Igbokwe
Labels: IPOB, News