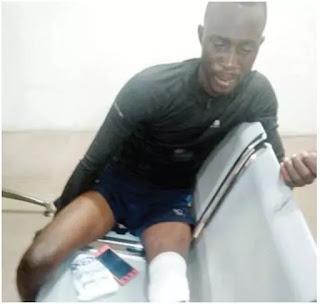 Attah Aninoko, a police sergeant attached to a house reportedly owned by Mohammed Abubakar, a former Inspector-Genaral of Police (IGP), has allegedly broken the leg of a worker with the Eko Electricity Distribution Company, Dele Ogundele.

The unfortunate incident occurred as Ogundele disconnected power supply to Abubakar’s house.
It was gathered that Aninoko dragged Ogundele from the pole and proceeded to brutalize him. In the process of beating the electricity worker, his leg was reportedly broken; and Aninoko allegedly stated that “nothing will happen”.
Investigation is still going on, as Aninoko say that he did not touch anybody and that no body broke his or her leg around the ex - IGP house.
Posted by Cheta Igbokwe
Labels: Gist, News