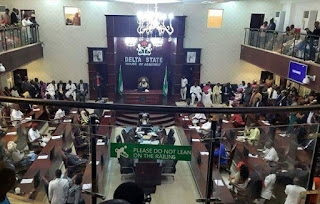 Elekeokuri, who stated this during the working visit of members of the committee to the headquarters of the Delta State Board of Internal Revenue in Warri, said that expanding the revenue base of the state must be a collective effort of all stakeholders.
Onyeme who commended the committee for the working visit, said the new partnership between the board and members would help address some of the teething challenges faced, including operational vehicles, more prototype offices in some local government headquarters and assisting to ensure that the Consolidated Revenue Law Of 2009 holds.
Onyeme said that Delta State dropped from its former number three position to fourth in revenue generation, coming behind Lagos, Rivers and Ogun states and attributed the development to some companies that left the state in the heat of crisis.