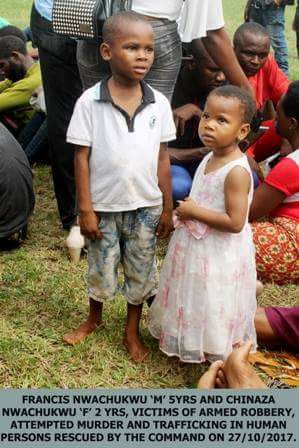 The Imo state police command has rescued two children  who were stolen and sold at Enugu state back alive and unhurt.

According to reports, the kidnappers hacked the mother of the children and stole the children from her in Uzoagba in the Ikeduru Local Government Area of Imo state, who were taken to Enugu state and were sold to a waiting buyer for N1.1m.
The first buyer, it was discovered, resold the babies aged five and two years,respectively.

But as luck ran out of the criminals, the Imo police command, through investigation, has arrested the five man syndicate in Enugu state and rescued the children unhurt.
Posted by BizzyAmb
Labels: Crime news