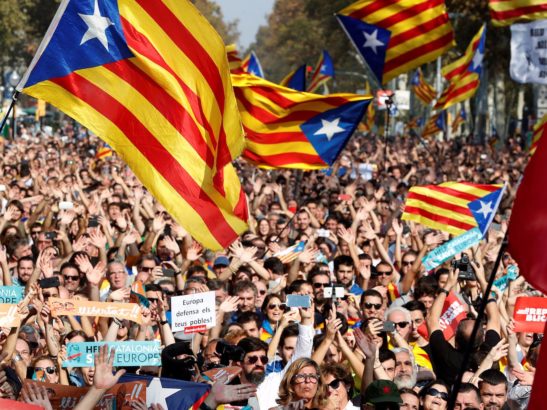 Catalonia’s parliament has declared independence from Spain in defiance of the Madrid government, which at the same time was preparing to impose direct rule over the region.
Spanish Prime Minister Mariano Rajoy immediately called for calm and said the rule of law would be restored. The motion passed in the regional parliament in Barcelona which was boycotted by opposition parties said Catalonia constituted an independent, sovereign and social democratic state. It called on other countries and institutions to recognize it.
The Catalan government said that of the 43% of potential voters who took part in the referendum, 90% were in favour of independence. But Spain’s Constitutional Court had ruled the vote illegal. In all, the motion declaring independence was approved with 70 in favour, 10 against and two abstentions in the 135-seat chamber.
Immediately afterwards, Mr Rajoy called for all Spaniards to remain calm, promising to “restore legality” to Catalonia. Spain’s Senate is still to vote on whether for the first time to enact Article 155 of the Spanish constitution, which empowers the government to take “all measures necessary to compel” a region in case of a crisis.


It would enable Madrid to fire Catalan leaders, and take control of the region’s finances, police and public media.
Posted by BizzyAmb
Labels: International news