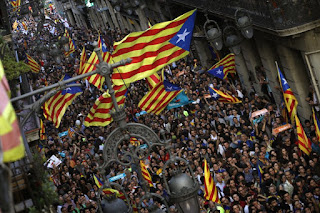 Thousands of people who have gathered outside Catalonia’s parliament building in support of the region’s independence bid cheered and danced after the parliament passed a motion saying it wanted to establish an independent Catalan Republic.

The crowds had watched the voting process and the counting live on big screens.
Regional President Carles Puigdemont and Vice President Oriol Junqueras exchanged congratulatory embraces and handshakes after the vote, which saw 70 out of 135 votes in favor of independence, 10 against and 2 blank ballots. Most opposition lawmakers had left the chamber in protest moments before the vote.

The two leaders were among the members of the regional government who cast votes in the parliamentary chamber Friday.
Catalonia’s regional parliament has passed a motion saying they are establishing an independent Catalan Republic.
Separatist lawmakers erupted in applause as the vote was approved with 70 votes in favor of independence, 10 against and 2 blank ballots. Most opposition lawmakers had left the chamber in protest moments before the vote.

Spain opposes the independence bid and the national government in Madrid is readying measures to take over control of the northeastern region. No country has expressed support for the secession bid.
The motion calls for beginning an independence process that includes drafting Catalonia’s new top laws and opening negotiations “on equal footing” with Spanish authorities to establish cooperation
Posted by Unknown
Labels: Foreign affairs