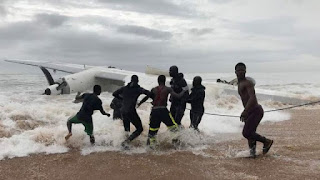 A cargo plane was said to have crashed into ivory coast sea, not long from when it took off from Abidjan airport, with three people dead and several injured.
According to the site, ten people were aboard the plane when it crashed.
But local news site Ivoire Matin reported three deaths and six people injured. One person has been taken into custody, it added.
It appears that the plane was a Ukrainian-made Antonov.