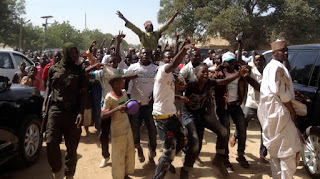 Local vigilante in Ogbunike community, Oyi Local Government Area of Anambra State have allegedly killed a resident, one Ndubuisi Oye, said to be preparing for his wedding on Sunday.

His killing has sparked a spate of destruction, as friends of the deceased have destroyed properties worth worth millions, belonging to the leader of the vigilante group.

The fiancée of the deceased, Miss Oluma Agbugba who narrated the story said, “We were coming back from a committee of friends’ meeting, in preparation for our wedding on Sunday.

“We got to St. Monica’s Road, my fiance alighted to refill the gasoline of his commercial bus and as we were about driving off, a Sport Utility Vehicle — Hillux vehicle blocked our bus and the man who emerged from the vehicle ordered both of us to come down from the bus.

“I alighted and sighted that the man had a gun. I made to make a call, but the man quickly stopped me, threatening he would kill me if I raised my phone again to make any call.

“The man ordered my fiance (Oye) to come down from the stirring and shut him at close range, and thereafter drove off, leaving him in his pool of blood.

“I started shouting after he had left and some passersby stopped to assist me to move him to Iyienu Hospital. He died on the way to hospital.’’
The deceased, 27 years old, it was learnt, hailed from Ezza, Ebonyi State, while the fiancee is from Imo state.

A Special Assistant to Governor Willie Obiano on Youth Mobilisation, Mr Junior Onwutaka confirmed the incident to our correspondent.
He said he saw some men on rampage and tried unsuccessfully to stop them as the mob overpowered him.

Onwutaka added “the mob invaded the commander’s house and set it ablaze.”
When contacted, the Anambra State Police Commissioner, Mr Garba Umar confirmed the incident, saying the police had intervened and the suspect had been arrested.

Umah said, “He has since been taken into the police custody. We ordered for his arrest and that of those who burnt his belongings.”