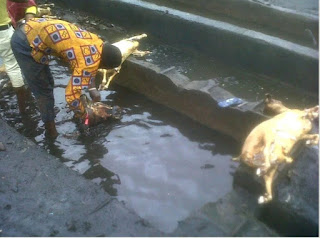 This is where majority of the meats sold in Anambra State Capital, Awka and its environs comes from.
Awka abattoir popularly called Kwata, the smells from this place is enough to make one lose appetite for meat.

The unbearable stench that oozes from the abattoir has forced most people living within the vicinity to relocate to other areas of the town and also made Eze-Uzu Awka, Obi Gibson Nwosu, who’s Palace is 20 meters away from the slaughter house, once threatened to close down the place due to how unkept the place is.

Commissioner of Heath in the State, Dr. Josephat Akabuike, once said that “it is suicidal to eat meat coming out from the dirty abattoir.”
Though the operators there had cried out over the unfair treatment they receive from the authorities in the state in spite of the heavy levies they pay, yet they still lack the basic amenities, including access to potable water needed for a decent abattoir.

I wonder if the state Governor, Chief Willie Obiano who claims to be the people’s Governor eat meat from this same place since 90% of Awka residence and his workers at the goverment house eat meat from this dirt or rather posion?
Posted by Unknown
Labels: Health