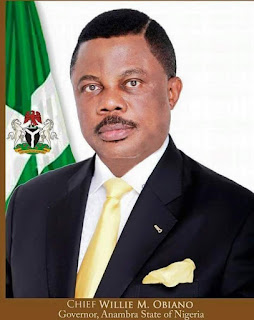 The members of the public are urged to disregard the wicked and spurious allegations making round and peddled by one Eneh Victor Chigozie that the Federal High Court sitting in Abuja has granted an order restraining the gubernatorial candidate of APGA, His Excellency Chief Willie Obiano from parading himself as the authentic candidate of APGA for the forthcoming gubernatorial polls in Anambra state. Indeed, one impostor Martin Agbaso had approached the Federal High Court, Abuja vide an originating summons for some frivolous reliefs. The said Martin Agbaso further filed an exparte application for interim injunction. 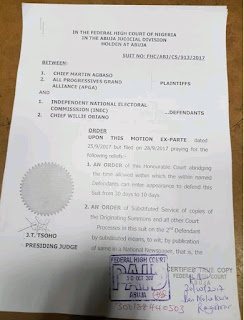 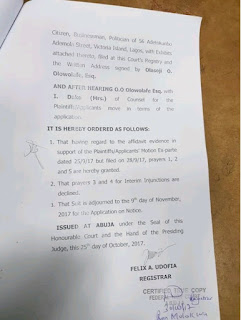 However, the Federal High Court Abuja while delivering its ruling on the said application on Friday, 27/10/2017 expressly declined the prayers for interim injunction against the respondents (INEC and Chief Willie Obiano). The court however granted the prayers of the applicants for accelerated hearing and substituted service on the respondents hence the publication in Sun Newspapers of today 30/10/2017. 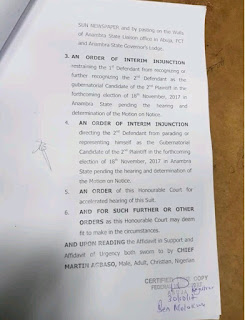 By the said ruling of the Honourable court, Chief Willie Obiano remains the duly nominated and authentic candidate of APGA for the forthcoming gubernatorial polls in Anambra state. Ndi Anambra and the generality of APGA faithfuls are urged to disregard the antics of the drowning opposition in Anambra who are bent on derailing the wheel of progess so far recorded by the incumbent APGA led government in Anambra state. Indeed, victory is certain and imminent.
Posted by Unknown
Labels: Politics