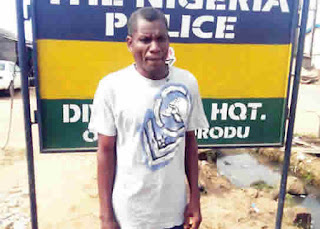 A 52-year - old retired civil servant , Paul Akpederi , is cooling his heels in a Lagos police cell after eating the forbidden fruit .
The Delta State indigene, who lives on Adegbite Street , Ori-Okuta, in the Ikorodu area of Lagos State , was alleged to have raped his 15- year -old daughter , Rose , for over three years.

PUNCH Metro learnt that Paul started sexually abusing Rose when she was in Junior Secondary School Three .
When the secret got to the knowledge of a teacher , Paul allegedly changed her school
The suspect was said to have continued the abuse until she got to Senior Secondary School Two in her new school .

Rose’ s former teacher was said to have run into her sometime in October 2017 and told a friend about Rose ’ s plight, who then alerted the Lagos State Office of the Public Defender through the agency’ s social media platform .

Our correspondent learnt that officials of the agency reported the case to the police at the Owutu division , who then arrested the suspect and rescued the 15- year -old .
A social worker , who was part of the rescue, told our correspondent that Paul started sleeping with his only daughter after separating from her mother .

He said , “ The man had been defiling his daughter since the wife left him . She is their only daughter and when the marriage broke down , he took custody of her. That was when the problem started .
“ He started sleeping with her when she was barely 12 years old . She was in JSS 3 then . They were about to start their final exams in the junior school when her colleagues found her crying uncontrollably . When they could not console her , they called the attention of one of their teachers , who then took her to a room .

“ She told the teacher what she had been going through and the teacher informed Rose’ s pastor at a branch of the Redeemed Christian Church of God , who counselled her. Her father was invited and that was the end of the case .
“ The man , who was desperate to cover up the crime , changed her school and she lost contact with the teacher . ”
PUNCH Metro gathered that the defilement continued until Rose got to SSS 2 in her new school.

It was learnt that the teacher in her former school ran into her one day and they had a brief discussion about her ( Rose) welfare.
The teacher , who suspected the abuse was still continuing , reportedly informed a friend , who wrote about Rose ’ s ordeal on OPD ’ s Facebook page on October 9.
A member of the OPD team that visited the victim ’ s school said she initially denied the defilement and attempted to exonerate her father .

He said , “ She kept lying and when we didn ’ t get a breakthrough, we got in touch with the mandatory reporter ( teacher ) who then assisted us in trailing her to her parent’ s house. The police arrested the man and rescued the girl .
“ They were both taken to a police station . During interrogation , the girl again denied that anything happened . Her father suddenly became aggressive and said we didn ’ t have his permission to interview his daughter .

“ The girl was taken to the OPD ’ s office at Ikorodu , where she opened up to an officer .
We took her to a home in Ijede , where she was placed in a shelter and protective custody. ”
The social worker who interviewed Rose said she gave a chilling account of her ordeal.
“ She said her father had been sleeping with her since she was in JSS 3 and he slept with her at least three times in a month. She said he slept with her in August and September 2017 as well. She explained that he always poured his semen into her private parts and he never used contraceptives . She said anytime he slept with her, he would tell her not to tell anybody. The girl said she could not tell people because she thought nobody would believe her, ” the official said .

It was gathered that she was placed on medication over complaints that she had yet to see her menstrual period , just as some growths were allegedly spotted in her private parts .
She was reportedly taken to Mirabel Centre, Lagos State University Teaching Hospital, Ikeja, for medical tests .
Our correspondent gathered that the result of the tests , which had been given to the police, showed that Rose’ s hymen was broken and there was “ continuous penetration ” of her private parts .

PUNCH Metro learnt that after the victim’ s confession, the Owutu Divisional Police Officer requested that she be brought back to the station .
In a drama that ensued at the DPO ’ s office , Paul, who had initially boasted, was alleged to have become humble after being confronted with his daughter ’ s confession .
“ When the DPO asked what he had to say to the daughter ’ s allegations , he said , ‘ Oga , I am in your hands o’ . The DPO ordered that he should be taken back to the cell , ” a source said .

The Director of the OPD , Mrs . Olubukola Salami, confirmed the incident, adding that the agency would pursue the case to the end .
She said , “ We cannot stop re -emphasising the zero tolerance of the Lagos State Government for domestic and sexual abuse . OPD is alarmed at the high rate of incidents of sexual abuse , especially by people of trust. OPD is not only interested in arresting and prosecuting perpetrators, it is also interested in curbing this rising trend. ”
The Lagos State police spokesperson, ASP Olarinde Famous -Cole , said the suspect would soon be arraigned in court .

He said , “ The case was reported at the Owutu division and the DPO led a police team to arrest the suspect . The girl was taken to a hospital where preliminary medical tests were conducted on her to be sure she was not infected or had any pregnancy or mental issue as a result of the sexual abuse .

“ The case will be transferred to the Gender Unit of the state police command for further investigation before the case will be charged to court . For now , we are working with the girl’ s confessional statement . ”