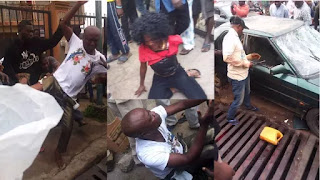 A courageous 'danfo' bus driver pursued and overtook the criminals on a very busy expressway.
As a Facebook user "woli" uploaded
"Thanks to a courageous danfo driver who pursued and overtook the bandits car to rescue the victim and the LASTMA officers who diverted traffic from the expressway". This made the robbers enter a link road. According to what the victim herself told me, the guys had previously robbed her four months earlier. "She said immediately she entered the car and recognized them, she began to scream. Items found in the car were two knifes, multiple ATM cards and loads of recharge cards," he said.
He also said that it was the intervention of the police DAT saved the three criminals from being killed by Lagos mob.
Posted by Cheta Igbokwe
Labels: Gist