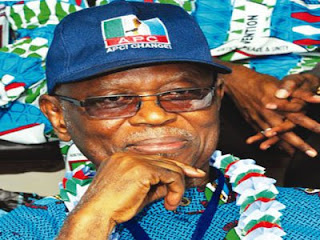 Crisis has broken out in the All Progressives Congress (APC), with 17 governors plotting to dump National Chairman John Odigie-Oyegun.

The governors are said to be angry that Oyegun has been running the party with only seven of their colleagues.
They may table their grievances at the party’s National Executive Committee (NEC) meeting on October 31 and pass a vote of no confidence in Oyegun.

The governors are said to have reached out to President Muhammadu Buhari on their decision to reject Oyegun’s leadership.
But Oyegun’s supporters have fingered former Edo State Governor Adams Oshiomhole’s backers as part of the plot.

They said Oshiomhole’s loyalists had been lobbying party leaders ahead of the NEC meeting to concede the slot to the ex-governor should Oyegun be forced to step aside.
APC seems set for a “make or break” meeting because of the sharp division among the governors on Oyegun.

Some of the governors are alleged to have refused to assist the party because of the national chairman.
A source, who pleaded not to be named, said: “Ahead of the NEC meeting of APC next week, there is tension in the party. About 17 of the 24 governors are unhappy with the national chairman. They are plotting to withdraw their support for him, unless he carries all of them along.”

“They expressed fears that the party might split the way the National Chairman was leaving decisions on issues to the ‘anointed’ governors,” the source added.
Another source said: “Initially, the 17 governors decided to write a letter to the APC leadership but they shelved the idea because it will appear as if they are reporting their colleagues.

“They are, however, reaching out to President Buhari but through the back channels to avoid embarrassing the President during the October 31 NEC meeting.
“They want the President to call the National Chairman to order. They said if care is not taken, they might be forced to come out openly on their concern.”

But a member of NEC said: “What you are hearing is a game plan to pass a vote of no confidence on Oyegun at the NEC meeting.
“The issues the 17 governors are raising are part of the conspiracy against the National Chairman. And what you are likely to see is the direction where things will go at the NEC session.

“As regards Oyegun’s preference for some governors, I do not think it is true. If the chairman has personal relationship with some governors, I think it is by virtue of their position or performance.
“For instance, the National Chairman does not hide his likeness for El-Rufai who he describes openly as ‘very energetic and full of ideas’. He is always proud of the governor of Kebbi and he relates well with Okorocha as the Chairman of the Progressive Governors Forum (PGF). He is also used to the Chairman of the Nigeria Governors Forum (NGF), Abdul-Aziz Yari, to get update on issues of governance.”

Another NEC source said Oyegun’s camp was already aware of “the plot”.
“In the last few days, strategists of Oshiomhole have been pushing his candidacy as successor to Oyegun ahead of the NEC meeting.

“But the pro-Oshiomhole governors will fail because by the APC constitution, only the Deputy National Chairman from the South, Chief Segun Oni, can succeed Oyegun.”
“The thinking is that Oni could resign at the NEC meeting to contest the Ekiti State governorship primaries. The APC constitution is silent on who takes over.

“So, we will be running into a deeper crisis, the source added”
National Publicity Secretary Bolaji Abdullahi told our correspondent last night on telephone: “I don’t know the basis for the discontent because the party’s leaders always meet with the governors every month. And on some occasions, we had more than 70 to 80 per cent attendance.

“In fact, we met with the governors on Wednesday in Abuja as part of our monthly session with them. If there is any discontent, such a forum would have provided an opportunity for them to raise it.”