We Will Send Fr. Mbaka On Exile - Biafra Zionist 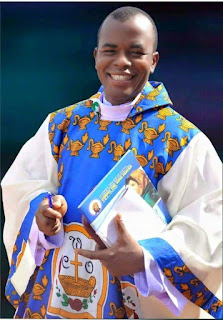 The Biafra Zionists Federation (BZF) have accused the founder of the Adoration Ministry Enugu Nigeria (AMEN), Reverend Fr. Ejike Mbaka of plotting to sabotage the Biafra project, threatening to chase him out of Biafraland, if he did not retrace his steps.
The Zionist leader, Barrister Benjamin Igwe Onwuka, who made the declaration in a statement accused the firebrand Catholic priest of supporting the killing of Igbo citizens by the federal security forces.

“The Zionists are warning Ejike Mbaka that he is putting his adoration ministry on the line. All the clerics supporting these killings will be sent away from here by the Biafra government and we will take over that his adoration ground.
“Attacking us and calling us names is unacceptable. People are being killed every day, has any of them come out to speak against it? We have marked Mbaka as enemy of Biafra,” he addd.

The self-declared President of Biafraland said: “it is regrettable that our church leaders, notable ones, instead of supporting Biafra, are busy using words that do not in any way reflect what is happening. Look at the killings in Abia, have they said anything.
“Go to South-Africa, Desmond Tutu, an archbishop was in in the vanguard fighting for the liberation of the people, but here in Biafra, Rev. Fr. Ejike Mbaka and archbishop Emmanuel Chukwuma, and several others are campaigning against the overall interest of the Biafran people.

“They cannot be supporting our opponents openly here in Biafra land. If they don’t want to support Biafra, let them mind their business, let them face their duty of preaching the word of God, but involving themselves in attacking the people is very tragic.
The group equally vowed that Nigeria’s Chief of Army Staff, Lt. Gen. Tukur Buratai, the Chief of Defence Staff, and the Minister of information, Lai Mohammed will end up in prison over the recent deployment of troops to Abia State. The Army exercise code-named ‘Operation Python Dance’ led to a confrontation between the military and the pro-Biafra agitators, resulting to reported death of scores.

Barrister Onwuka, argued that banning IPOB will not affect restoration of Biafra which his group was already advancing. “It is a waste of time; IPOB just a group, Biafra is a country. You cannot ban a nation which came into being in May 1957. So, banning IPOB is just simple waste of their political time. I said this because Biafra has already been recognized by the international community.

He went further: “We all saw what happened at the just concluded UN General Assembly on September 22, where Biafrans were allowed to protest by the New York Government, but such was not the case with the Nigerian Government. Their rented protesters were denied access. So, this confirms our earlier statement that the US has since recognized Biafra, far back in 2013 by then President Barrack Obama.”
On the army invasion of Abia State, the Zionists said “it is clearly a tragedy. It is clearly a military invasion; it has nothing to do with IPOB or Nnamdi Kanu. This is the North invading the East because of Biafra. I want to deeply condemn that act.

“The attack on Biafran soil is an attack on all of us. The army is not supposed to be interfere in the internal security situation of the nation; they are not supposed to get involved in domestic security of the country. So, sending the army to Aba and Umuahia was with an ulterior motive.
“Using Nnamdi Kanu and the IPOB to as a pretext to kill young men and women in in Abia and other parts of Igbo land, the North will have to pay for it. So, I condemn in totality the brutality of the army in the name of Operation Python Dance.

“We, therefore state clearly today that all those involved, the Chief of Defence Staff, the Chief of Army Staff and the Minister of information, will pay for these killings, they will all end up in ICC and then in prison.
“Anyone involved in this military force against un-armed agitators will never go scot-free. We are not only going to take them to the ICC but prosecute the matter to the end until they are made to pay dearly for it. This time around, they will not escape justice. They did it in 1967-1970 and went away with it but it won’t happen this time. Britain and Saudi Arabia will not even save them.”

“For Lai Mohammed, can you see the lopsidedness in his argument? How can someone compare IPOB with herdsmen? These herdsmen have been killing people in their hundreds unhindered and that is why I insist that some Northern leaders are behind Boko Haram and herdsmen.
“So, the statement from Lai Mohammed is rubbish and I am telling him today that he will face ICC over the killings in Abia. We are as well calling on the Northern religious leaders, the Sultan of Sokoto and the Emir of Kano to call President Buhari and the Army Chiefs to order. They should order them to withdraw these troops and rampaging herdsmen from Biafra land”, he added.