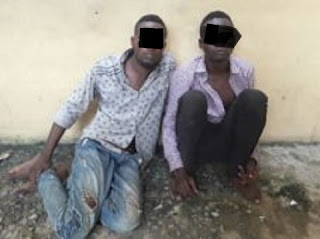 
Ibrahim told newsmen he had taken part in a robbery operation, while Agboola said police came to arrest him at a tea joint where he was waiting for Ibrahim and other members of the gang who allegedly went for the operation.

“The police came to pick me where I was waiting at the tea joint after Ibrahim and others had been arrested.”
Posted by Cheta Igbokwe
Labels: Crime