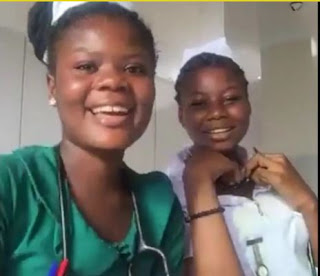 Two nurses at the Royal MMR Hospital by name, Tracy Ewurama Marcel and Ramatu, have been reportedly sacked after they were seeb doing a live facebook video at the hospital and ignoring patients which they were meant to attend to.

The nurses were said to have been fired after their video went viral on the Internet. Tracy and Marcel however said that they were not aware their act was against the hospital rules.The management of the hospital said they were surprised by the fact the nurses “choose to do Facebook Live while at work and responded to comments at the expense of patients waiting to seek health care”.
Posted by Unknown
Labels: Gist