Release our members that are labeled IPOB supporters - MASSOB 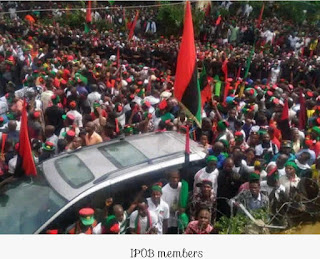 IPOB claims ownership of Radio Biafra
Meanwhile, IPOB in a statement on Saturday said that the
Radio Biafra which is said to be based outside the country neither belonged to MASSOB nor its leader, Chief Ralph Uwazuruike .
”
Also , MASSOB on Saturday called on the Federal Government to immediately release its members who were labelled supporters of IPOB , arrested and detained by security agents .
The statement, signed by the Deputy Leader of IPOB , who is also the Deputy Director of Radio Biafra , Uche Mefor , noted that the station later went off- air and eventually shut down in December 2009 .
Brooks stated further that the US was committed to Nigeria ’s unity and would support a peaceful resolution of any crisis in the country.
MASSOB said eight of its members were arrested by security agents on September 13 , 2017 , while they were on their way to Onitsha , Anambra State , to celebrate the group ’s 18 th anniversary .
The spokesman for the American Embassy in Nigeria , Russell Brooks , told SUNDAY PUNCH on Friday that the US government does not view IPOB as a terrorist group .