Policeman Killed By IPOB Get Promoted By IG.

A+ A-
Print Email
Policeman Killed By IPOB Get Promoted By IG. 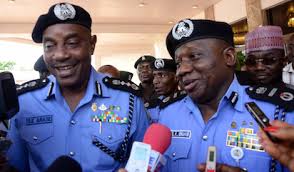 The slain policeman recently murdered by suspected proscripted members of the Indigenous People of Biafra (IPOB) has been posthumously rewarded and promoted by the Inspector-General of Police, Ibrahim Idris.
The IG announced the promotoion of the late Cyril Nwosu to Assistant Superintendent of Police (ASP), during his visit to Abia State on Thursday, September 21.
Idris declared the IPOB crisis in the state as a trial for all of Nigerians, adding that the country had come out stronger. He urged Nigerians to uphod the unity of the country.
The IG also lauded the role of the traditional institution in peace-building and fostering national unity
He commended Abia State Governor Okezie Ikpeazu saying: “We have seen a lot of changes in Abia. The crisis experienced in the state in the past few days is not new, where some misguided elements tried to achieve their dreams in a wrong way.
“I believe Nigeria must be stronger, every part of Nigeria has its strength, if will we try to harness this strength together, we are going to make this country far better than we are now”.
He hailed the role played by the governor during the crisis.
Dr Ikpeazu reaffirmed his commitment to ensuring the protection of lives and property of Nigerians living in the state irrespective of where they come from.
He thanked God that peace had been restored to the state by the police and other security agencies.
“We see the police force as enablers that can help us drive growth in all aspects of our economic growth in Nigeria. We believe firmly that unless there is security, we cannot grow our prosperity,” he said
It would be recalled that late Cyril Nwosu killed when suspected members of the banned Indigenous People of Biafra (IPOB) attacked and burnt down the police post at the Ariaria market in Aba.
Posted by BizzyAmb
Labels: News