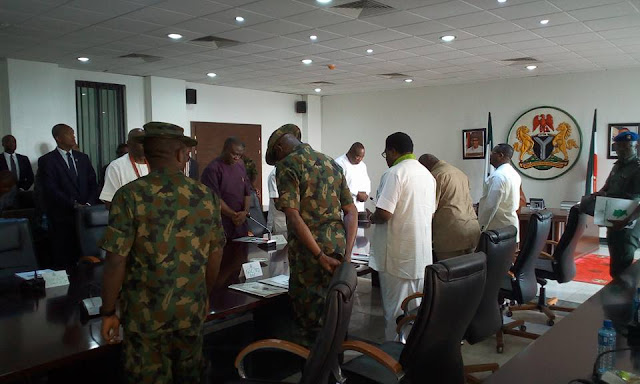 The Indigenous People of Biafra (IPOB) have condemned the South East governors’ forum for proscribing their activities. Last Friday, governors of the five South Eastern states met in Enugu and unanimously agreed to ban the activities of the secessionist group following the clash some of its members had with the Nigerian Army in Aba, Umuahia in Abia state and Oyigbo in Rivers state.

In a statement released by its publicity secretary, Emma Powerful last night, IPOB said the ban is irrational as they remained the most peaceful organization in the world today. It said the quick ban of IPOB activities by the 5 south Eastern state governors proved that the governors will remain slaves in the hands of their Hausa Fulani slave masters forever.

The group also called on the Federal government to immediately produce Kanu, saying that since Thursday night when his home was attacked by soldiers, Kanu and his parents had remained missing and their whereabouts unknown. The group said the call for the FG to produce Kanu was more apt as soldiers sent to his house had allegedly killed and taken away the bodies of about 22 persons from Kanu’s compound, including a dog owned by the IPOB chief.

Part of the statement read,

“The South East governors in their routine meetings held at Enugu government house were quick in declaring the peaceful activities of IPOB under the leadership of Mazi Nnamdi Kanu as illegal without condemning the barbaric and unprovoked killings of our people in Umuahia, Aba and Igweocha (aka Portharcourt) and continuous killing, raping of our women including the destruction of our farm crops by Hausa fulani herdsmen masquerading as cattle rearers in our land.

“It is dangerous that the governors who are the chief security officers of their respective states in the zone would decide to hand over their people to the enemies who were out to kill, maim and destroy because of their selfish reasons.

“We also aware that late Chief Chief Emeka Odumegwu Ojukwu and General Philip Effiong protected their people during the first pogrom and ethnic cleansing in 1966’to 1970 by the Vanders from the north led by General Yakubu Gowon.”