IPOB: House Of Reps Reveals They Will Only Support Lawful Agitations 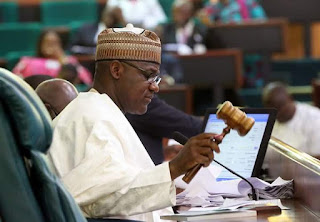 Yakubu Dogara the speaker of the House of Representatives, has said that lawmakers can only support issues that have substance within the confines of the law and not contrary.
Dogara was reacting the recent calls for secession by the Indigenous people of Biafra(IPOB) group. PoliticsNGR learned that he also spoke on the calls for restructuring, adding that 'credible legislative inputs that would address the issue'.

"We are all aware that during the recess, the agitation by a group of persons based in the southeastern geopolitical zone of the country and the heightened call by many groups for restructuring of the country dominated discourse in Nigeria. It is in this regard, that I wish to commend our religious and traditional rulers, leaders of various ethnic nationalities, elder statesmen, security agencies, the Governors and indeed governments of the states in the Federation for their display of statesmanship during this period.

Indeed all patriotic Nigerians rose in unison to uphold the fundamental rights of all citizens to move freely and reside in any part of the federation as they choose, without let or hindrance. It appears to me that the citizens of this great country have sounded the message loud and clear that they stand for a united, prosperous and just Nigeria.
It is necessary to emphasize that Nigeria is a constitutional democracy with a clear legal framework for resolving differences that normally arise among citizens, between citizens and government as well as between the structures and arms of government.

Make no mistake, as representatives of the people, we have a duty to champion the protection and preservation of the rights of our constituents and peoples. We are very conscious and indeed jealous of the fundamental rights provided under our Constitution as well as the Human and Peoples Rights under the African Charter.
As an institution, this House stands firmly on the side of those who seek equity, fairness and justice so long as such is pursued in accordance with the provisions of the Constitution of the Federal Republic of Nigeria which we as Honorable Members have sworn to protect and preserve.

Anyone or group who assaults our Constitution will not find a partner here because our oath of office repels it, but those who stand for justice, fairness and equity will have partners in us because our oath of office compels it. We would work shoulder to shoulder with all those working within the ambit of the constitution and the law for all Nigerians regardless of creed or ethnicity to be first class citizens as no nation can truly be first class if it harbours within its borders second or third class citizens."

On calls for restructuring

"Do we have a legislative response to the issues that have been thrown up? Is the National Assembly involved in the debate? Can restructuring take place outside the existing legal order? Indeed all the arguments about restructuring are at the end of the day, legislative issues.

It may be necessary in due course for the National Assembly to have a second look at the issues that have been thrown up. The National Assembly as a representative and product of the people cannot act contrary to the wishes and aspirations of its constituents. We need to sift all the ‘noise’ and find out what exactly a majority of our people actually want? This is a responsibility we cannot outsource.”

Going forward, it is my view that we need to revisit some aspects of the voting on Constitution Alteration. Luckily we still have the legislative window of conferencing with the Senate, where we have differences. “Honourable colleagues, it is clear that the things that bind us are overwhelmingly more than those that divide us. Indeed the individuals or groups who sow the seeds of discord and fan the embers of hate and disunity are in the negligible minority.

As representatives of the people, we must continually sensitise our people on the need to support all measures for the enthronement of a prosperous, united and just Nigeria where all citizens have equal stake under the governance of the Rule of Law. It was Martin Luther King, Jnr, who said that “Returning hate for hate multiplies hate, adding deeper darkness to a night already devoid of stars. Darkness cannot drive out darkness; only light can do that. Hate cannot drive out hate; only love can do that. Hate multiplies hate, violence multiplies violence…”

We must learn to love one another, understand each other and respect each other for Nigeria to reach her full potentials politically, socially and economically. “Of course all healthy democracies are noisy. But they are filled with noise that elicits debate, not noise that incites to violence. When speech or noise leads to debate its called free speech but when noise or speech incites to violence then that is hate speech. Hate speech has no place in a democracy and must never be tolerated or allowed.

Words are powerful and once spoken it’s difficult if not impossible to take them back. Words have the power to create the atmosphere in which we live. There is nothing that exists that was not created by or in consequence of spoken word(s). Hate speech multiplies words that have the capacity to drown the truth. In the midst of hate speech, the truth is usually the casualty.
Therein lies the real danger of hate speech. Yet, it is only in the truth that everything finds its worth. “It remains for me to charge that the prevailing situation should serve as impetus for more determined performance on our part. The genuine appreciation of these issues constitute a defining parameter for our job as we proceed in this second half of our tenure as the 8th House. Let us all resolve to get down to work and the Almighty God helping us we shall deliver."
Posted by Unknown
Labels: News