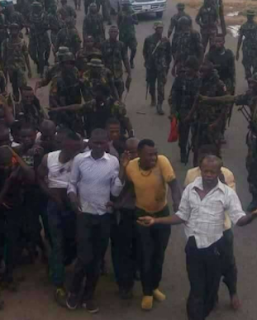 The Nigerian Federal Government has accused the Indigenous People of Biafra (IPOB) of using fake videos of mass killings from other parts of Africa and doctored to look current, to mislead the international community and win their support.  Minister of Information and Culture, Alhaji Lai Mohammed, stated this when he addressed Online Publishers in Lagos on Monday.

''We must warn the nation against IPOB's next line of action, which is to externalize their lies and propaganda. Now they are writing to the government and the national parliaments of some Western nations to give the impression that they are victims of an ethno-sectarian violence orchestrated by the government, hence they need protection. Some of the tools that have been employed by IPOB include blatant lies and cheap propaganda, and the medium of choice for the organization is the Social Media. IPOB has harvested gory videos and pictures from other lands and the distant past, which they are now circulating via the Social Media, to deceive the international community into believing that the people of the South-east are being subjected to state-sponsored, ethno-religious violence. Such videos, which have very high emotive quotient, are circulating on the Social Media as we speak. These videos are doctored to make them look current. They are fake!'' he said.
Alhaji Mohammed said some ill-informed foreign individuals are already trumpeting IPOB's lies and propaganda and even alleging genocide, adding: ''It is either they do not understand the meaning of genocide or are being mischievous. Either way, there is nothing like genocide anywhere in our country today. What we have in the South-east is a clampdown on a band of lawless people who have no regard for the laws of the land.''
He appealed to the Online Publishers to help counter the fake narrative on the Social Media on the situation in the South-east
''In the interest of the nation and your own interest, you must counter this fake narrative, report the issues responsibly and without sensationalism and present the truth to the public. If the Social Media, your platform, is discredited because of the activities of quacks and Internet Trollers, you too will be discredited and your publications will simply go down. That is why you must distinguish yourselves, as trained and tested professionals, from the charlatans who have seized the Social Media by the jugular, those who have no regard for the truth and who do not care whether their fake posts set the nation ablaze,'' the Minister said

He reiterated his earlier statement that IPOB is being sponsored by a coalition of politically disgruntled and treasury looters, and that the organization is a contraption against the Buhari Administration.
Posted by Unknown
Labels: News