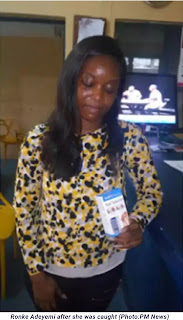 According to Njoku, on the fateful day, the accused walked into the supermarket with the pretence of buying something and that in the process, she allegedly stole one Varisi Nail Solution valued at 10,000 and hid it inside her bag unknown to her that the CCTV cameras mounted inside the supermarket had captured her.
According to PM News, Ronke who lives in Idado Estate, Lagos was arrested by the police at Mobolaji Johnson Police post, Lekki and arraigned before an Igbosere Magistrate Court on a one count charge of stealing.
Posted by Cheta Igbokwe
Labels: News