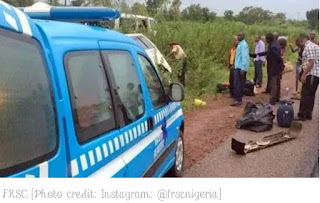 The Public Relations Officer of Ogun State Traffic Compliance Agency, TRACE, Babatunde Akinbiyi said one of the vehicles was coming from Kano and heading to Lagos.

Two persons were on Tuesday killed in separate auto crashes which occurred on the Lagos-Ibadan Expressway.
The first accident involved three vehicles along Danko filling station, while the other occurred at Redeem Church axis of the expressway.