A visit to akwa ibom by the vice president 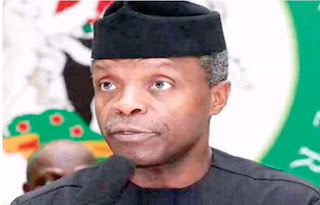 Vice-President Yemi Osinbajo is expected to visit Akwa Ibom State today to inaugurate a 350 million per annum capacity syringe factory and a metering factory in Onna Local Government Area. Also, the vice-president will inaugurate a reconstructed General Hospital in Etinan Local Government Area of the state.
The inauguration of the multi-million-naira projects is part of activities marking the 30th anniversary of the creation of the state. The state’s Commissioner for Information and Strategy, Charles Udoh, while briefing journalists on the activities marking the 30th anniversary, had hinted the syringe and metering factories were the outcome of the Industrialization drive of the Udom Emmanuel administration.
Posted by Cheta Igbokwe
Labels: News