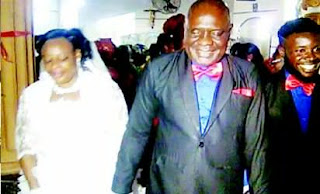 Mr. Orjinta said: “I have made many failed attempts in the past to get a soul mate since many were not willing to settle with him because of his sight challenge.


Alphonsus Orjinta has finally gotten married in Enugu after years of rejection and loneliness. A 1991 Political Science Education graduate of University of Nigeria Nsukka, UNN and a teacher till date.

Though, he was born blind, Mr. Orjinta never allowed fate to dictate his pace in life; he took bold steps to create his world and made a meaning out of it despite the natural hindrance and challenge posed by his blindness.

Narrating how God finally answered his prayers in an interview with Vanguard, Mr. Orjinta, who could not contain his joy, thanked God for the opportunity and privilege granted him after several unsuccessful attempts at getting married largely due to his blindness.
Posted by Cheta Igbokwe
Labels: Gist